The World of Alphonso Stewart 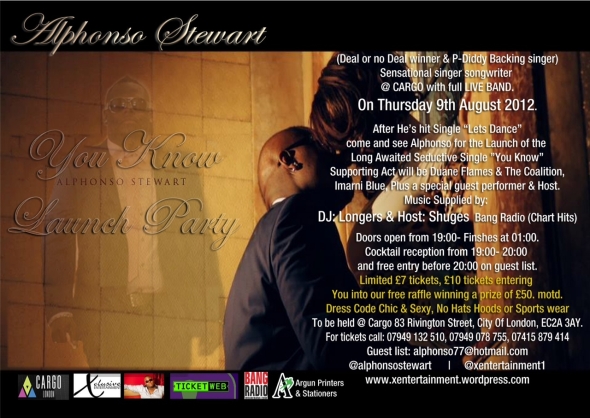 You Know by Alphonso Stewart

‘You Know’ is the second track from Alphonso Stewart’s new album, Reborn. Not content with hitting you with slick lyrics, he has commanded a sexy, seductive ‘slow jam’ snap with a heavy baseline and transatlantic feel.  In combining these sounds Alphonso has taken this track to another level.  Appealing to connoisseurs of R&B / soul music this single has the possibility to explode.

Remember to share our weblog with your family and friends…

Directions are as follows:

Come out of Camden Station. Turn right. Walk towards the bridge. Past the KFC. Turn left before you reach under the bridge. Then take the first left then the first right and walk straight up the stairs to the venue.

Please Re Broadcast if your a fan of good LIVE MUSIC;)

Alphonso Stewart, sensational singer songwriter has appeared in the dream factory – officially, Alphonso is the first R’n’B singer songwriter to serenade the Deal Or No Deal game show. Presented by TV veteran Noel Edmonds, Deal Or No Deal is a nail-biting show that keeps the home and studio audience anxious till the last of the 22 boxes is revealed. Players can win anything from 1p up to 250,000 pounds. London born, Alphonso was lucky to have got chosen out of thousands to get the once-in-a-lifetime opportunity to spank the banker and play for the big prize.

Alphonso is a budding singer songwriter longing to fulfil his dream of becoming a successful recognised artist. He has sung backing for various Artists such as P Diddy, Jason Donovan and Anastasia at the Diana Memorial, Leona Lewis in the ITV X factor finals, Simply Red at Euro’96, Keane and, Chaka Khan in the Stage Play ‘Mama, I want to sing’. Alphonso said, ‘The Deal Or No Deal experience was completely different to what I am used to, I have no problem performing with accomplished artists, I get nervous but nothing compared to how petrified I felt the first time I spoke to Noel Edmonds in the dream factory.

On the show Noel Edmonds said, “There is a lot of talent here, Alphonso is a professional singer whose credit includes sing with P. Diddy, Leona Lewis, Keane, Simply Red…. he’s proper he is!” Alphonso said. ‘I’m ready to break out into the music and entertainment scene. I want people to hear and appreciate the quality of my methodical sound. I want to
captivate music fans, celebrities and critics. I want people to love the music I put out there. My songs explore social issues, death, and love – it is realistic and delves into the paradox of life.”

Deal Or No Deal has proved a major hit on Channel 4 achieving audiences of up to 5.5 million viewers.